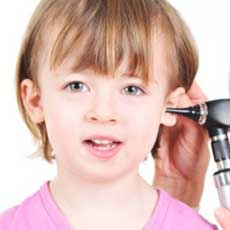 Formal research studies have been unable to demonstrate a consistent link between otitis media with effusion, OME, and speech and/or language difficulties.  Many speech-language pathologists feel as though they have seen and heard many compelling cases which reinforce the hypothesis that chronic and recurrent OME affects speech and language development.

I have seen evidence supporting the link between chronic OME and speech and language development in my own children.  Cameron and Spencer are identical twin boys born in April 1992.  They survived their first winter without ear infections and were developing early language skills on target.  The next winter both boys had recurrent ear infections affecting one (unilateral) or both (bilateral) ears.  The doctor prescribed various medications to treat active infections and to prevent further episodes (prophylaxis).  By the spring of 1994, Cameron and Spencer were using grossly age-appropriate language but their speech was very difficult for anyone but mom or dad to decipher.  By summer, the ear infections and fluid were gone and the boys demonstrated a language explosion with growth in both vocabulary and sentence length.  Yet, their speech remained mostly unintelligible.

Ear infections resurfaced early the next fall, yet, the doctor was reluctant to recommend pressure equalizations (PE) tubes because the fluid was unilateral and there were no concerns about language development.  The boys were still young enough that articulation need not be an issue of great concern.  Again, we spent the fall, winter, and spring on medications for treatment and prophylaxis.  This winter there were concerns about speech intelligibility.  Family, friends, and the children's teachers and other speech-language pathologists experessed an interest in having formal articulation evaluations for both boys.

At the time of the evaluation at 34 months of age, both boys had fluid in one ear, yet hearing levels were at or below 10dB across four frequencies in both ears.  The evaluating speech-language pathologist indicated difficulty interpreting conversational speech yet she recommended waiting six (6) months before persuing formal speech therapy.  In the interim, I instituted a speech therapy "on-the-fly" program at home which resulted in Cameron and Spencer improving their production of s-blends with some improvement in overall intelligibility.  Their speech was still difficult to decipher when the topic was unknown.

Again in the late spring, both boys had a decrease in middle ear fluid and were able to ward off ear infections without nightly medication.  This year, the articulation gains were noticeable.  First, family and close frientds stopped questioning the children's speech; then strangers were able to follow a conversation with these very social boys.  The articulation improvements were especially noticeable in their production of multisyllabic words and the prosodic elements of speech.

Even after the ear infections were gone, the boys had residual articulation issues which required speech therapy.  After viewing these changes first hand, I am convinced that the dramatic improvements in speech and language skills of these two children did not coincidentally occur when their ear infections subsided, but were directly related to their OME histories.  Too bad many insurance companies don't interpret it as I do.